A collaborative residency between Tom Krasny and Jen Sykes.

A month long residency throughout November 2020, commissioned by the Goethe Institute as part of their ‘Generation A = Algorithm’ programme, whose aim is to encourage people to reflect on the consequences, challenges and dangers of Artificial Intelligence.

As part of this programme, a humanoid NAO robot toured several cities across Europe and was taught a new skill by local artists in each city. This page documents artists Jen Sykes and Tom Krasny's experience working with the NAO during its residency Glasgow and the new skills it was taught.

Both Tom (they/them) and Jen (she/her) are passionate about pedagogy as a liberatory and creative practice.

In this project, we wanted to divert from commonplace views and conversations framing robots as opponents or a “separate species” to humans. We perceive this assumption as false since the production of robots does not happen in isolation of human input.

Another common tendency in the popular perception of robots is describing a ‘zero sum game’ situation where robots are either portrayed as a threat to jobs, or as functional objects replacing humans in mundane repetitive work. Both of these beliefs originate from systems where value is measured by productivity levels. Instead, we were more interested in the robot’s potential as a social agent- to enrich lives, encourage curiosity and imagination, and be perceived as a collaborator with a different set of abilities.

We were also thinking about power, and how the historical tendency to abuse it resulted in it having a bad reputation. How can we stand in our power compassionately? And how can robots assist us in this?

Therefore, we opted to teach “Gaia” (the name that our NAO was assigned) practices that affirm subjectivity, non-conforming self-expression and an alternative to oppressive patterns of interaction. We wanted to demonstrate that by learning this, robots can actually help to introduce a positive and necessary change in social perception, and promote an awareness, respect and curiosity to differences.

Both of the skills we taught Gaia are rooted in LGBTQ history and stem from our lived experience moving through urban and public spaces.

Vogue is a danceform developed within the Black, Latinx and Gay Ballroom Scene of Harlem, New York (its roots can be traced back to The Harlem Renaissance, and Harlem’s drag ballroom competitions as early as the 1920s). Developed by people who were denied access to aspects of mainstream society because of the intersection of racism, sexism, transmisogyny and homophobia, Voguing evolved as a means for showing up, taking up space and demonstrating skill, sophistication and wit in a creative and non-oppressive way. Ballroom competitions created an inclusive space for empowerment, belonging and expression which we were keen for NAO to model and uplift to by teaching it this style.

Our first instincts were to try and use existing Machine Learning models to automate a tracking of different dance poses. We would then break these poses down and translate this information to NAO. We used Runway ML and the Open PifPaf model to analyse dance videos and generate tracked poses.


Each joint could be tracked and visualised with a colourful dot. The intention being the NAO could track the moving dot using its 'Red Ball Tracker' object to translate the movement into its own joint We discovered the more fluid mapping of one movement to another was problematic for the NAO in the Chroeographe Software where its building block style coding environment was more suited to colour tracking working with distinct outputs such as on/off type triggers. With this in mind we approach the tracking from a human perspective, using the generated videos to help us break down each dance pose in more detail to then pass this information on to the NAO. 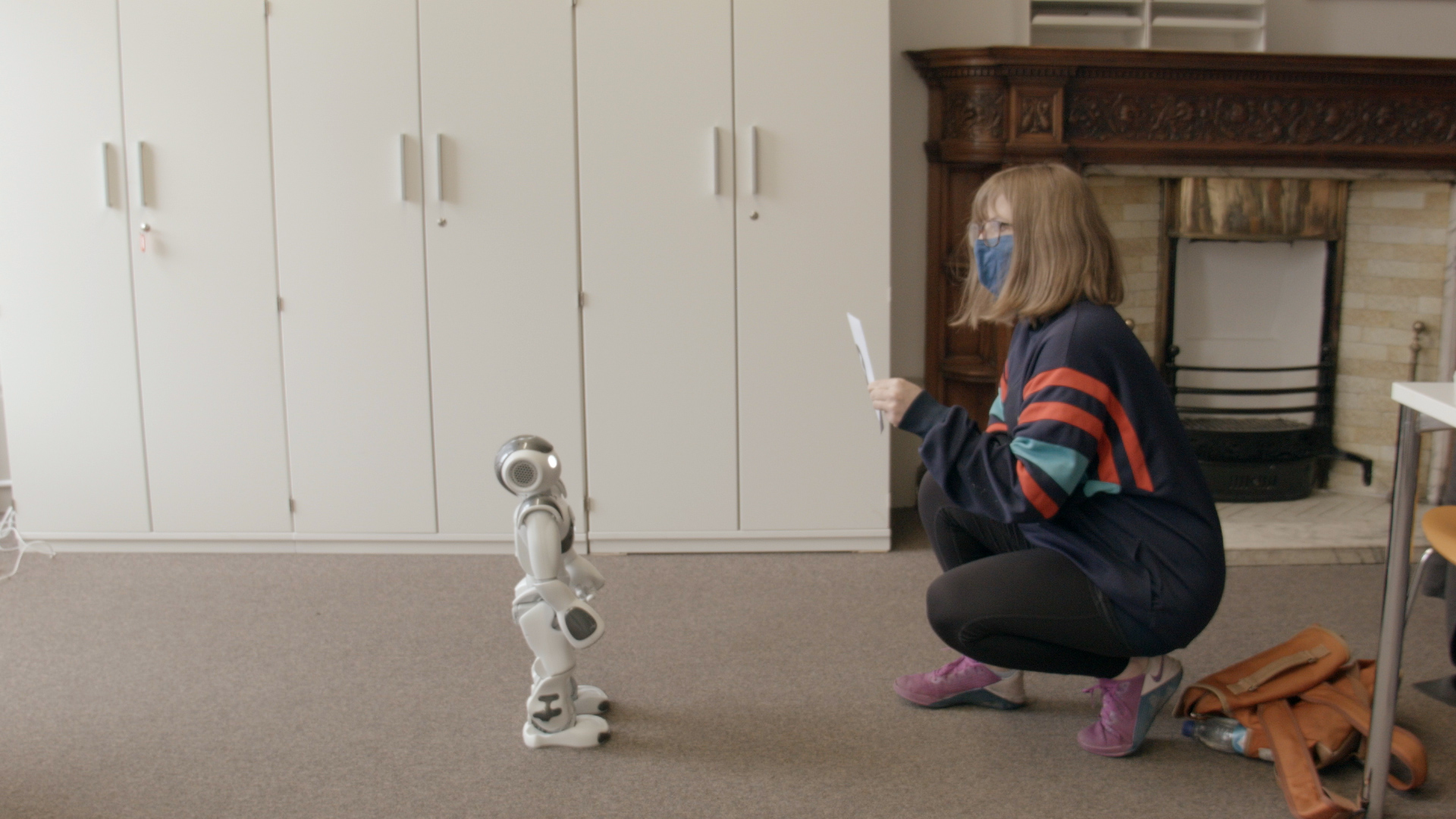 We adapted our teaching approach to use the Animation Timeline and Autonomous Mode with the NAO. This provided us with a more flexible, intuitive mode of teaching the poses. By manually moving each individual joint into position, we could act as the translator between our own knowledge and the NAO's understanding.

It was interesting for us to note how our own dissemination of the information had to change in order to translate it to the NAO. We tput ourselves in a of 'thinking like a computer' mode in order to break down each pose in a way the NAO could interpret effectively. Certain movements we thought possible had to be revised due to the NAO's joint movement range which is different than a humans’. 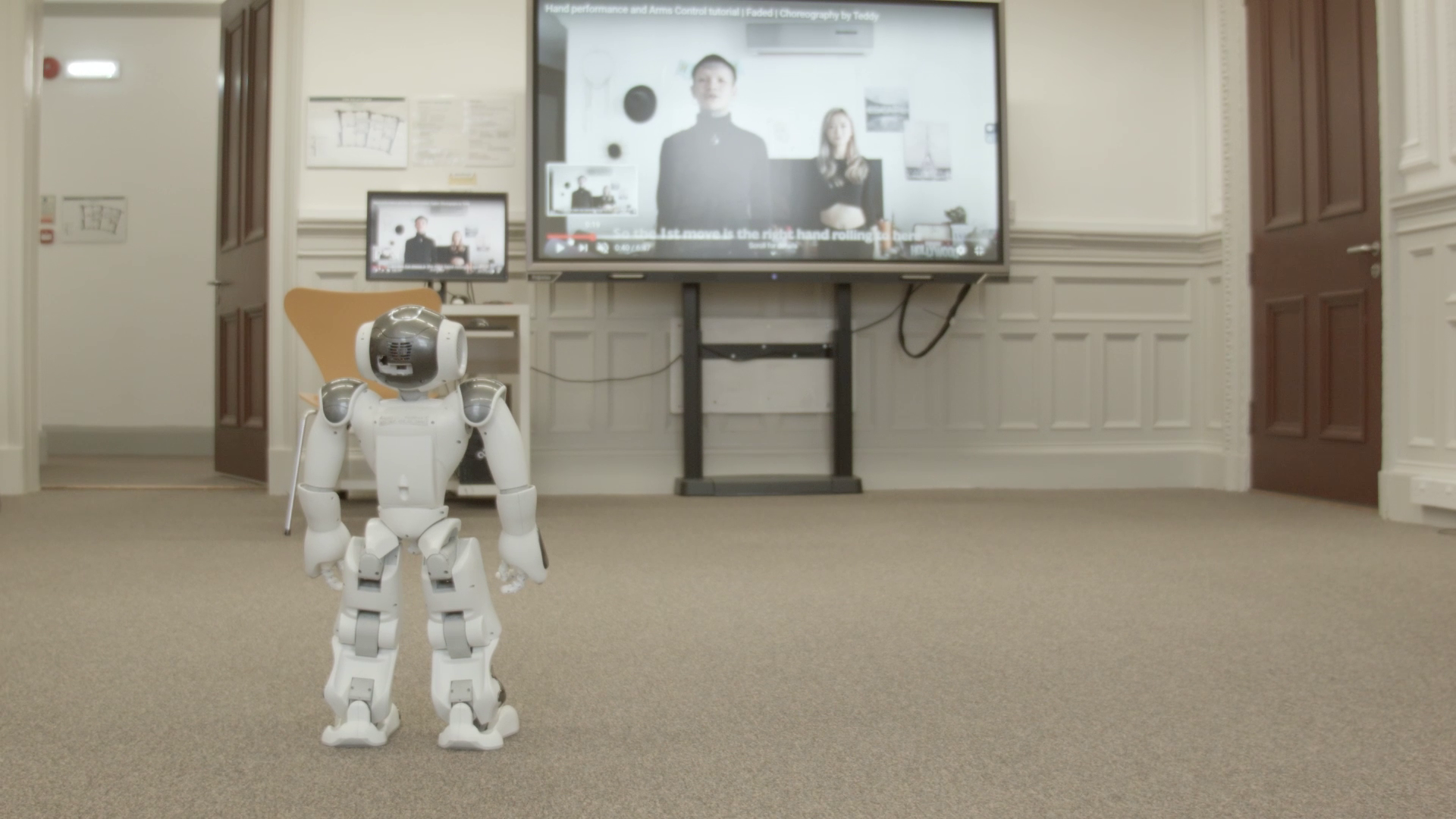 As the residency progressed we used the methods mentioned above to teach the NAO a Vogue sequence that we created using individual movements we liked and re-interpreted for NAO.

The video below includes documentation of the complete sequence. 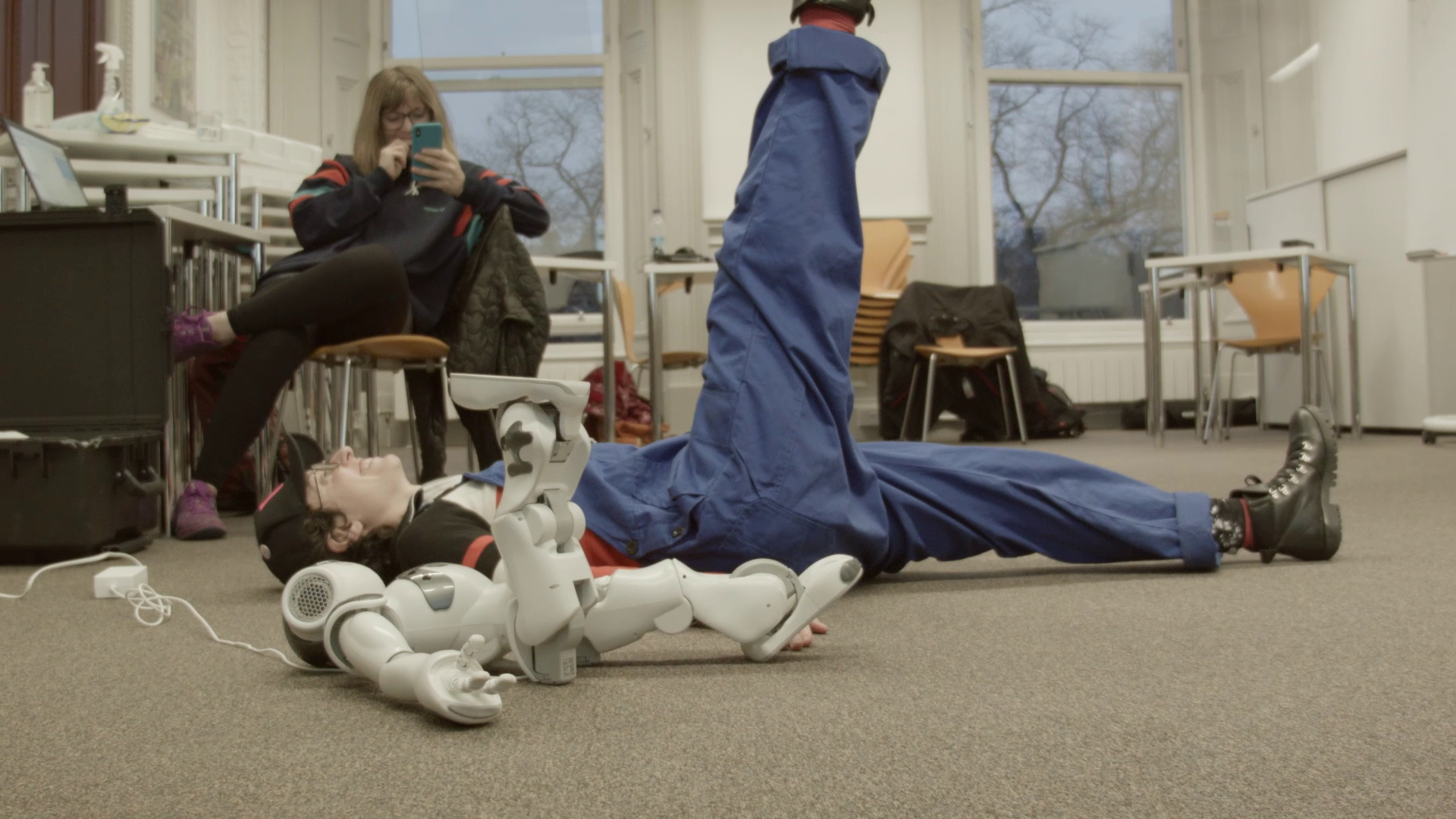 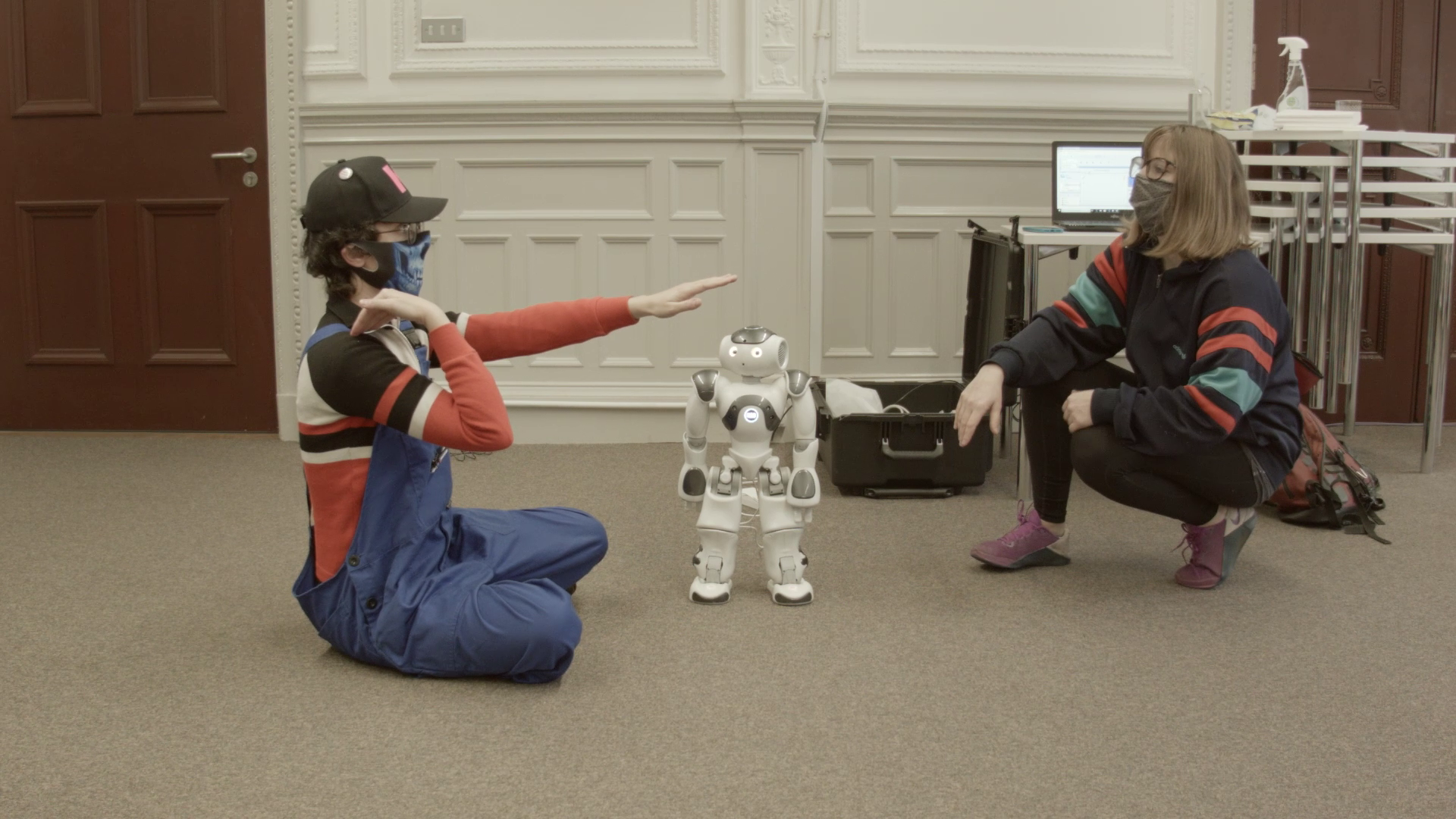 “Pronouns are the words someone may use in place of their name. Some examples include “she/her” or “he/him” or gender-neutral pronouns, such as “ze/hir,” [pronounced: zee/heer] or “they/them”. Some people use specific pronouns, any pronouns, or none at all.

Importance of pronouns to well being

Pronouns, a way to streamline language, have historically emphasized a binary construction of gender in many languages, including English (Butler, 1999). While many people use a pronoun associated with their sex assigned at birth, gendered pronouns, and the assumptions behind them, may represent a daily stressor for LGBTQ people, particularly people who are transgender and nonbinary (TGNB).

Pronouns can sometimes be a signifier for someone’s gender identity but not always. We do not want to assume people’s gender identity based on expression (typically shown through clothing, hairstyle, mannerisms etc.) By providing an opportunity for people to share their pronouns, we communicate that we’re not making the assumption that their gender identity is based on their appearance.”[1][2]

Often within computing any identification processes have potential to come with an inherent bias either from the sources of identification they have been trained on or via the methods adapted by programmers. The NAO’s pre-existing building blocks in Choreograph point towards some of these problematic areas within the Gender Identifying and Facial Recognition code blocks. We reflected on non-harming alternatives to this by staging our own speech recognition process. In "having a conversation" with the NAO we aimed to demonstrate the flexibility a robot can have in learning new protocols such as affirming people's pronouns. Which humans can find more difficult to adjust to due to engrained societal perceptions and beliefs.

As part of this conversation, Tom shared their Hebrew pronouns with Gaia, to which Gaia. Following affirming instructions we introduced in advance, Gaia responded in a neutral and supportive manner.

Setting a norm of sharing pronouns in introductions gives everyone an opportunity to self identify instead of automatically assuming someone’s identity or which pronouns they use. It indicated that gender identity is subjective rather than assigned. Including pronouns is a first step toward respecting people’s identity and creating a more welcoming space for people of all genders.

Research shows Affirming LGBTQ youth’s gender by using pronouns that align with their gender identity has been shown to significantly improve mental health outcomes. Specifically, The Trevor Project’s 2020 National Survey on LGBTQ Youth Mental Health found that TGNB youth who reported having their pronouns respected by all or most of the people in the lives attempted suicide at half the rate of those who did not have their pronouns respected.[3]

We are extremely excited by the possibilities of disrupting gender-uninformed and biased communication protocols that can further emerge from the example we tried with GAIA. 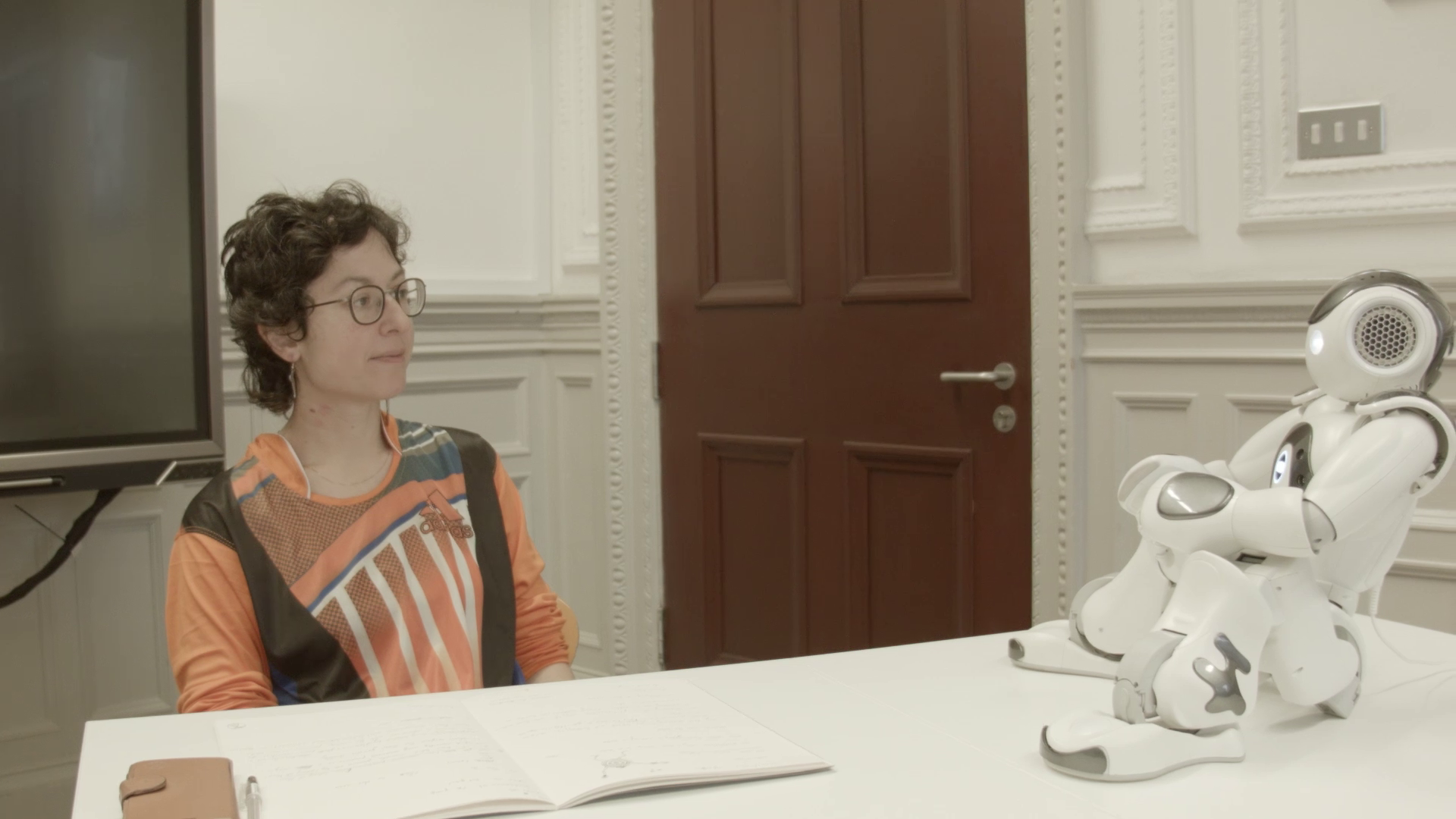